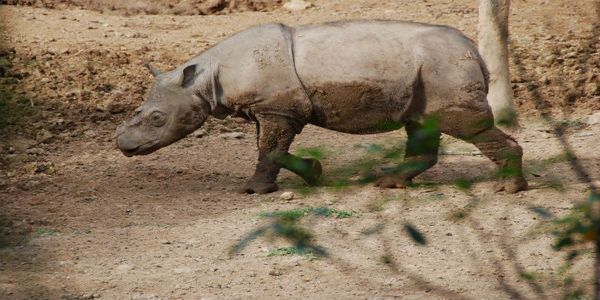 We all know that every day rhinos die so you would be forgiven asking why the world mourned the loss of Tam. Well the answer to that was Tam was the last surviving male Sumatran rhinoceros in Malaysia and is believed to have passed away in his 30’s as a result of old age. That is actually quite old for a Sumatran rhino. Tam was transferred from the wild back in 2008 to a sanctuary in Malaysian Borneo. His health had been rapidly deteriorating since April this year and he finally passed away back in May.

Tam is survived by a female Sumatran rhino named Iman who is unable to reproduce because of a ruptured tumour in her uterus. The news of his death is not good with an estimated 80 Sumatran rhinos left in the wild which is not good but is a little better than the prognosis for the Javan rhino which is through to number just 58 in the wild. The Sumatran rhino one roamed across Asia with a range spanning from South-East India through to Bangladesh, Myanmar, Thailand and of course the islands of Sumatra and Borneo.

What’s left is limited to Sumatra

It is widely thought that the wild Malaysian populations are now extinct though it is believed there is a small population that resides in Kalimantan, Indonesian Borneo. The remaining majority of wild Sumatran are thought to roam Sumatra which is Indonesia’s largest island with a handful likely to exist in Indonesian Borneo. It is not easy to evaluate a rare species with such scattered distribution roaming dense mountain forests.

On the island of Sumatra the wild populations are thought to be isolated because their habitats have been fragmented as a result of deforestation. This means there is a tremendous amount of inbreeding and the future for these genetic sub-populations is bleak. They have been extinct in the wild in Malaysia since 2015. Because Tam and Iman had no possibility of reproducing, they were a lost cause and because of that, the Malaysian population has been functionally extinct for many years.

With small populations and few rhinos living in close proximity combined with the isolation of viable habitats the Sumatran rhino has faced fatal consequences. Female rhinos do not mate regularly have a tendency to develop uterine cysts and growths. That is what caused Iman to become infertile and as the population grows smaller, the less successful individuals become at reproducing. With the death of Tam there may be an ambitious plan developed to capture as many wild rhinos as possible and breed them in captivity.

Even with that plan in place, success is not guaranteed. There has been limited success in US zoos, however with 45 rhinos captured since 1984, only 4 calves have been born. The last roll of the dice may involve what can only be termed as being resurrection. This would involve using stored eggs and sperm from dead rhinos such as Tam and Iman and artificially inseminate them or do IVF in captive surrogates. Sumatran rhinos are a unique species, they are the only member of the rhino family with no relatives so the only other candidate for surrogate must be another Sumatran rhino.

The science for resurrection is still developing and costly which makes it an unlikely long shot that also raises its own practical and ethical dilemmas. Were it to succeed that could well mean humans end up farming an ecologically dead species. The desired outcome is for wild animals to live in the wild and make a contribution to the ecosystem from which they evolved and not live in zoos in perpetuity.

Tiger Numbers On The Rise

Are Ships To Blame For Whale Shark Decline?