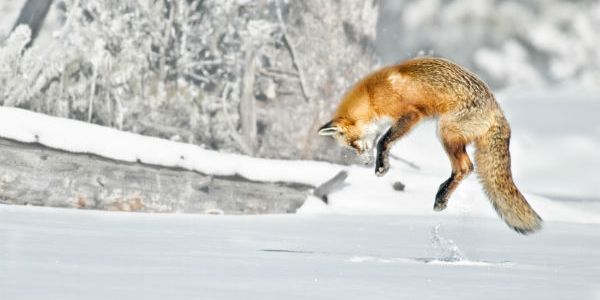 A young Arctic fox took an epic journey of 3,506 kilometres in just 76 days, walking across the ice from the Svalbard Islands to Northern Canada. One Greenland newspaper quoted scientists as saying the fox’s journey left them speechless. The young female fox was fitted with a GPS tracking device at Norway’s Polar Institute. The fox was then let go in the wild at the end of March 2018. She was released on the East coast of Spitsbergen, which is the main island of the Svalbard archipelago.

The young fox was less than a year old when she began her journey Westward in search of food. It took her just 21 days to reach Greenland which meant she covered a distance of 1,512 kilometres before she began the second leg of her epic journey. The fox was tracked as far as Ellesmere Island in Canada which is a further 2,000 kilometres west which took all of 76 days after she began her journey from Svalbard.

The scientists tracking the fox were not so much amazed by the length of the fox’s journey. Instead what widened their eyes was the sheer speed she covered the distance. The fox travelled an average of just 46 kilometres a day and on some days travelled as many as 155 kilometres. Scientists from the Polar institute told Norwegian public broadcaster NRK that at first, they couldn’t believe what they saw. Initially they thought the fox was dead and had been carried that distance by boat. However, there were no boats in the area so they were a little shocked.

No fox has ever been recorded travelling that far and at that speed before. Scientists from the Polar Institute working with Norway’s Institute for Nature have been tracking how foxes have been coping with the dramatic changes to the Arctic seasons. They say whilst there is enough food during the summer months, during winter the situation gets quite difficult for them. During these months, Arctic foxes usually migrate to other areas to find food to live off.

This particular fox however went much further than almost all other foxes that have been tracked before, demonstrating the extraordinary capacity of the creature. The Polar Institute which tracked her journey found the fox took two breaks during her journey across Northern Greenland. The scientist think the fox probably curled up in the snow to wait out bad weather which they are capable of doing thank to their extremely protective fur. Alternatively, she may have found a food source such as sea birds in an open channel of water.

Scientists say they will never be able to tell what the fox ends up doing in Canada because her transmitter ceased to work in February but they are certain her eating habits will have to change. On Ellesmere Island, foxes largely survive on lemmings instead of the marine diet mainly consumed by foxes on Svalbard. The disappearing polar ice pack is directly impacting Arctic foxes. They no longer have the ability to visit Iceland and this means that over time the population on the islands is likely to become completely isolated.

Tiger Numbers On The Rise

Are Ships To Blame For Whale Shark Decline?