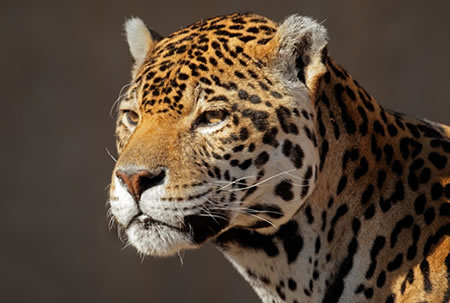 Jaguars’s are mainly quiet creatures that are happy to spend time alone when hunting or fishing. They love to live in hot countries and are amazing athletes, and can jump up to 15 metres in one bound! They use their coloured fur as camouflage in the long grass, and are one of the few cats who love the water and are excellent swimmers.

Hi there, I’m a jaguar and I’m one of the largest cats around. Though I may look like a leopard, I’m much bigger and far more powerful. I’m an excellent hunter, and can even swim. I live in the Amazon, but unfortunately my numbers are dropping rapidly due to humans destroying my habitat – some even kill us for our fur. I think it looks better on us though. Please adopt me if you can, as we may become extinct unless somebody helps us very soon.

Jaguars are the largest member of the cat family in the Americas. They once roamed from the southern United States in North America, all the way to Patagonia in Argentina, South America. They are now practically extinct in the northernmost regions due to loss of habitat. On rare occasions, jaguars have been spotted in the US states of Arizona, Texas and New Mexico.

Evidence suggests that the jaguars in Arizona – though few in number – might be actively breeding. The endangered jaguars in Arizona and in the rainforest are able to survive because the heavily-wooded regions and/or swamps are conducive to their safety and – ultimately – their survival.

Jaguars are not nocturnal, as regularly claimed. They are – more correctly – crepuscular: That means their active hunting times are dawn and dusk. As such, a jaguar’s daylight period is typically one of rest. During the rest period, a jaguar will conceal itself within the tree canopy or in the thick undergrowth. Its patterned fur provides a very effective camouflage.

The camouflage is also useful during the jaguar’s active period, which takes up approximately 60 percent of its day. By concealing itself so effectively, a jaguar will usually ambush its prey, rather than giving chase. In the animal kingdom, the jaguar’s ambush skill is second-to-none. This skill has been attributed to the fact that jaguar’s are apex predators. An apex predator resides at the top of its food chain and has no predator of its own. Humans and human actions are the jaguar’s greatest threat.

A jaguar might also stalk its prey during its active day, blending in with its surroundings as it waits to pounce. The jaguar’s solid and compactly-built body facilitates a smooth agility, whether it is climbing a tree or crawling through dense vegetation. When the jaguar attacks, it leaps onto its prey and bites through the animal’s skull with its sharp canine teeth.

Following the kill, the jaguar hauls the body to a secluded area before eating it. Being carnivorous, the jaguar will eat between 1.4 and 2 kilograms of meat each day, depending on its size and the availability of prey. Following periods of famine, jaguars have been known to eat in excess of 20 kilograms of meat during a single feeding session.

A day in the life of a jaguar is only one of numerous days for a jaguar that survives into old age. Jaguars are renowned for their longevity, living up to 15 years in the wild. They can live up to 23 years in captivity.

I’m so happy that you are reading and learning about endangered jaguars. Our numbers are falling really fast, and we need more people to learn all about us – and to help us to survive and become more plentiful.

I would like to be your friend, and I hope you will become my friend. Since friends tell each other things about themselves, I’ll tell you five things you didn’t know about me. You can share them with your other friends if you like. Here goes:

Why I need your help

The jaguar is a near threatened species with only 15,000 left in the wild …

The livelihoods of the world’s Jaguar population are under threat, as the rainforest is destroyed and threatens the natural habitat of one of the natural world’s most beautiful and elegant of creatures.

The International Union for Conservation of Nature has deemed that jaguars are Near Threatened. Because their numbers have declined so rapidly, the species have attained conservation status. Without concerted conservation efforts, these endangered jaguars face the distinct possibility of extinction.

Human actions are mostly responsible for the threat against the existence of the species. The exception is hurricanes. Human behaviours that have reduced jaguar numbers include the following:

A fifth of the Amazon has already been destroyed, impacting jaguars in the rainforest. Funds raised from the ‘adopt a jaguar’ campaign will support efforts to preserve large swathes of jaguar habitat in the Amazon. 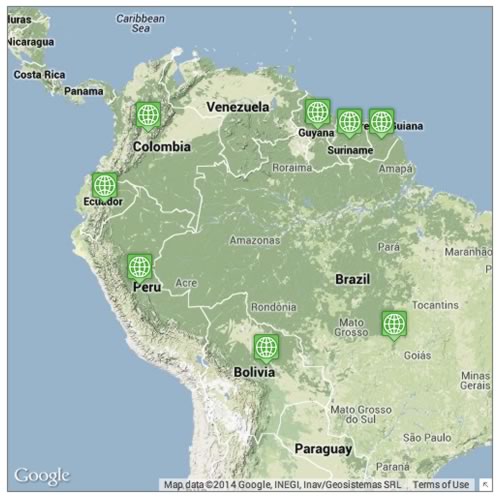 The scientific or Latin name for a jaguar is Panthera onca and they now exist primarily in Central and South America – particularly in the Amazon rain forest, which is home to the largest population of jaguars.

The Amazon countries where these endangered jaguars can be found are :