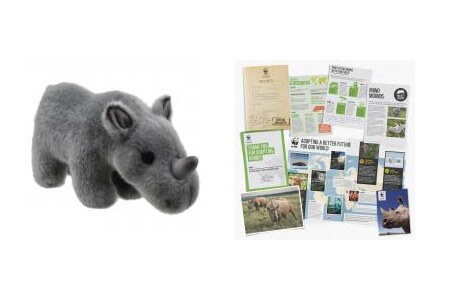 Adopt a rhino and receive

Rhinos are solitary creatures, which like to spend time alone unless mating. They are very territorial and mark out their areas using dung to ward off other rhinos! They like to live in wooded areas and are very inquisitive of intruders into their territory. Their horn is put to good use if they feel under threat.

I’m a black rhino and I desperately need your help. My home is Kenya where poachers have hunted most of my friends and family for human uses. It’s so bad that there are now only 500 of us left alive, and unless something is done we will become extinct very soon. Please adopt me today and help WWF to stop the illegal trade in my horn, it looks much better on my face than it does ground down and sold as medicine.

The rhinoceros is one of the few remaining species from the ancient era of giant mammals. Today, the only land animal larger than a rhino is the elephant. Like all large herbivores, rhinos spend a great deal of time grazing or browsing for enough food to nourish their massive bodies.

There are several subspecies of rhino that fall into two basic categories. The Asian rhinos live in eastern India and south East Asia and are identified by a single horn and thick leathery skin that acts and looks like armoured plating. African rhinos are much larger and have two horns.

Rhinos are considered nocturnal. They graze for food during the night and at dusk and dawn. During the day they find shady areas to rest. Having very little hair on their bodies, rhinos tend to wallow in mud. The mud protects their skin from insect bites and sun damage.

Black rhinos tend to stay by themselves or with their babies. White rhinos graze in groups of up to twelve individuals. All rhinos have a strong sense of smell and use this to find group members after they are separated.

During the day, rhinos are in constant danger from poachers. Evolving with no natural predators, rhinos do not show any signs of caution and will wander into open areas without hesitation. Poachers consider the rhino an easy target because they tend to visit watering holes at the same time each day. Poachers can easily kill them just by waiting with a rifle. Once killed, poachers often take the rhino’s horn and sell it on the black market. A rhino horn can sell for more than one hundred fifty thousand British pounds.

The world’s rhino population can be found in Africa and South Asia. Their numbers are under threat from poachers who kill them for the use of their horns in medicines. To compound things, countries where rhino populations exist have been ravaged by wars, making the enforcement of international law against their killing, difficult to enforce.

A few centuries ago, vast herds of rhinoceros dominated the plains of Africa. Sadly, hunting and poaching have reduced their numbers from more than half a million to less than twenty thousand. Three out of the five remaining rhino species are critically endangered.

The population of white rhinos is starting to increase but needs continued support. Because rhinos have only one baby every few years, population recovery is very slow and precarious. Poachers kill off rhinos faster than they can reproduce.

The leading cause of population decline is because rhinos are killed by poachers. Rhinos are killed for their horns to be used in traditional Asian medicines. As the people of Southeast Asia has become more affluent, there has been a drastic increase in demand for rhino horns.

Trading rhino horns and body parts is banned under international law. Not all countries enforce this law. African rhinos live in countries that have been plagued with war and political instability. This makes it difficult to enforce laws about poaching and hard to protect the rhino’s natural habitat. It has been so hard to stop poachers that some conservationists capture rhinos and surgically remove their horns before returning the rhino to the wild. Those horns are disposed of and not sold. The poachers leave those rhinos alone because there is no financial incentive to killing them.

Protection focuses on preserving existing habitat, uncovering the illegal trade of rhino horns and working with authorities to save and protect rhinos from illegal poaching. Animal adoption organisations help to procure funds for conservation. Zoos often have fundraising campaigns where patrons can adopt a rhino in the wild. Rhino adoption helps to protect the habitat of endangered rhinos. 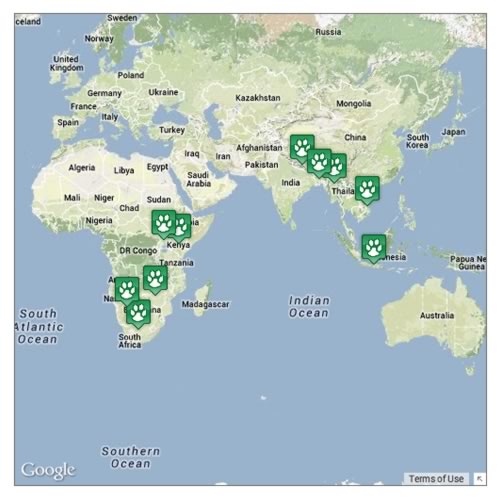 Rhinos are found in Africa and south Asia as indicated on the following map.