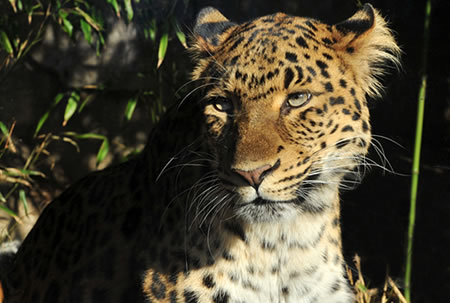 Adopt a leopard and receive

The amur leopard is a solitary creature that spends its time travelling about under the cover of darkness. They are highly skilled hunters who are athletic and quick on their feet when they are stealthily on the prowl. They can adapt to most habitats but prefer to live in forests. A large male can weigh up to a whopping 75kg!

Please adopt me, I’m an Amur leopard and I am one of only 35 left on the planet. We are really close to extinction and are in desperate need of your help. We are hunted for our coats by poachers in Russia, who are also killing most of our food supply as well. As our habitat gets smaller and our food becomes more and more scarce, we are struggling to survive. Please adopt me today before it’s too late.

Largely nocturnal and famed for their stealth, leopards are elusive, highly adaptable predators, and can run at speeds of up to 35 miles per hour. Although smaller in stature than tigers, lions and jaguars, leopards are able to tackle similar-sized prey to those species due to their huge skulls and powerful jaw muscles.

After a two-year period where they are protected by their mother, and with the exception of brief periods during mating, leopards live a largely solitary existence. A typical day will involve long spells of rest during sunlight hours, followed by a period of hunting at night.

When hunting for prey, which range in size from tiny dung beetles to large antelopes, the leopard makes use of its spotted coat for camouflage and relies upon its quickness of movement. Leopards exist in a range of climates, varying from deep snow to the intense heat of deserts.

Leopards are extremely gifted at climbing, far more so than other similar mammals, and can often be observed resting within the branches of trees. This ability to climb is also utilised as a hunting method. Leopards will hide in the trees, using their fur to blend in with the leaves and branches and scout for prey, before pouncing head-first onto their victims. A leopard will bite its prey through the back of the neck, damaging the spine and causing paralysis. On occasions, they will drag the carcasses of their prey back up into the trees, keeping them away from other scavengers in the process and allowing themselves the ability to feast on their kill in peace

Generally, leopards will avoid human contact as much as possible, only attacking humans in the wild if they feel threatened, or if they are struggling to find regular alternative food sources.

Less skilled at swimming than some of the other big cat species, they are, nonetheless, very much adept in the water and make use of their strong swimming ability to catch fish, which serve as a light snack.

Although they rarely stay in the same area for more than two of three days at a time, leopards are very territorial. A leopard will announce its presence to other leopards with growls, roars and purring. Territory is marked with urine and sometimes claw marks on the ground. Male leopards tend to overlap their territory with the smaller boundaries inhabited by female leopards.

For a leopard, mating is a relatively quick process, although it is not uncommon for the male to stay with the female for a few days afterwards, providing them with food and protection.

Female leopards are approximately 20% smaller than their male counterparts and, because they do not have a set breeding period, are able to give birth all year long. A mother will hide her cubs for the first month or so, abandoning them to hunt. In addition to suckling them, she will also provide them with meat when they are old enough to consume it, generally after about eight weeks.

There are less than 35 amur leopards left in the wild…

Leopard populations globally are diminishing caused predominantly by human over-population and the stresses this causes on the natural habitats that leopard’s call home. Poaching is perhaps the biggest of all the threats, as the fur of the leopard is extremely valuable, as are other souvenir items such as teeth and tails. In addition forest degradation is contributing to the leopard’s status as being endangered.

The numbers of leopards in the world, especially in the wild, are quickly diminishing. Some subspecies of leopard are endangered to such an extent that they face the serious possibility of extinction in the near future; unless we make a serious effort to help.

Perhaps the most frustrating thing about the plight of the leopard is the fact that many of factors causing their current status as a threatened species are human-induced. By choosing to sponsor a leopard you can assist in the efforts to protect this beautiful creature against such threats.

Poaching is perhaps the biggest threat to their survival. At least 11 Amur Leopards are known to have been illegally killed since 2002, around a quarter of their wild population. Especially prevalent in Russia, leopards are mainly poached and their skin, as coats made of leopard fur are extremely valuable. Other parts of the leopard’s body, including teeth, tails and whiskers, are also sold on the black market for high prices and kept as souvenirs.

Forest degradation has been another major factor in making leopards an endangered species. Man-made forest fires, often started to aid in the finding of scrap metals, destroy the leopard’s natural habitat, creating an unsuitable living environment.

In addition, research suggests that leopards have a history of inbreeding, lasting for several generations. As a result, an increased risk of birth defects harms the survival chances of leopard cubs.

The population and distribution of the Amur leopard has been reduced to a fraction of its former size. It is estimated that 80% of its range was lost between 1970 and 1983. Today, the majority of Amur leopards live in the temperate forests of the Primorskii region of Russia − a 5,000 sq km area between Vladivostok and the Chinese border – with a few individuals living in the Jilin and Heiongjiang provinces of NE China, and possibly a few in North Korea.

The Amur leopard, also known as the Far East Leopard or Manchurian Leopard, is listed as Critically Endangered in the International Union for Conservation of Nature’s Red List of Threatened Species. With only around 35 left in the wild, it is considered the world’s most endangered cat.

The Amur leopard can be distinguished from other leopard subspecies by the widely spaced rosettes with thick borders on its coat.

One of the most significant threats facing the Amur leopard is loss of its forest habitat due to logging, forest fires and the conversion of forest for agriculture. In addition, over-hunting of roe and sika deers, their main prey species, means Amur leopards sometimes have to seek out other prey to sustain themselves.

Amur leopards will also eat small wild boars, hares and badgers but, in the absence of wild prey, they may venture into deer farms in search of food, sometimes resulting inleopards being shot by farmers protecting their livelihoods.

Despite their Critically Endangered status, Amur leopards are still poached for their skins and for use of their bones in traditional Asian medicines. Agricultural land and villages surround their remaining forest habitat, making access relatively easy for poachers. 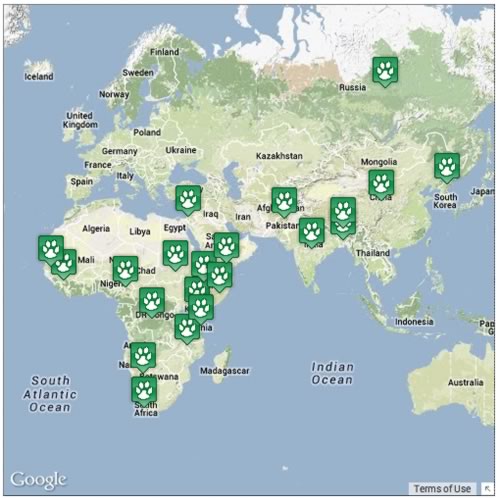 The African Leopard exists across most of sub-Saharan Africa, including:

Amur Leopard (Panthera pardus orientalis)
The Amur Leopard subspecies resides in the Far East and can be found in: